Bonn, 5 February 2015 (WWEA) – According to preliminary figures gathered by WWEA, the year 2014 brought a new record in wind power installations: More than 50 Gigawatt of capacity were added during the year 2014, bringing the total wind power capacity close to 370 Gigawatt. The market volume for new wind capacity was 40 % bigger than in 2013, and significantly bigger than in the previous record year 2012, when 44,6 GW were installed, 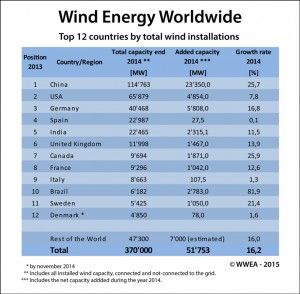 – China added 23,3 Gigawatt, the largest number a country has ever added within one year, reaching a total capacity of 115 GW.

– The US market recovered from its previous slump and reached 4,9 Gigawatt.

– The newcomer of the year 2014 is Brazil with additional capacity of 2,8 Gigawatt, the first time that a Latin American country has reached such figure.

– Denmark set a new world record by reaching a wind power share of 39 % in the domestic power supply.

– Amongst the top 12 countries, Spain, Denmark and Italy saw stagnation in terms of new installations.

For the first time since 2009, the speed of growth was bigger than in the previous year: The global installed wind capacity grew by 16 % compared with the year 2013, significantly higher than the previous 12,8 %. 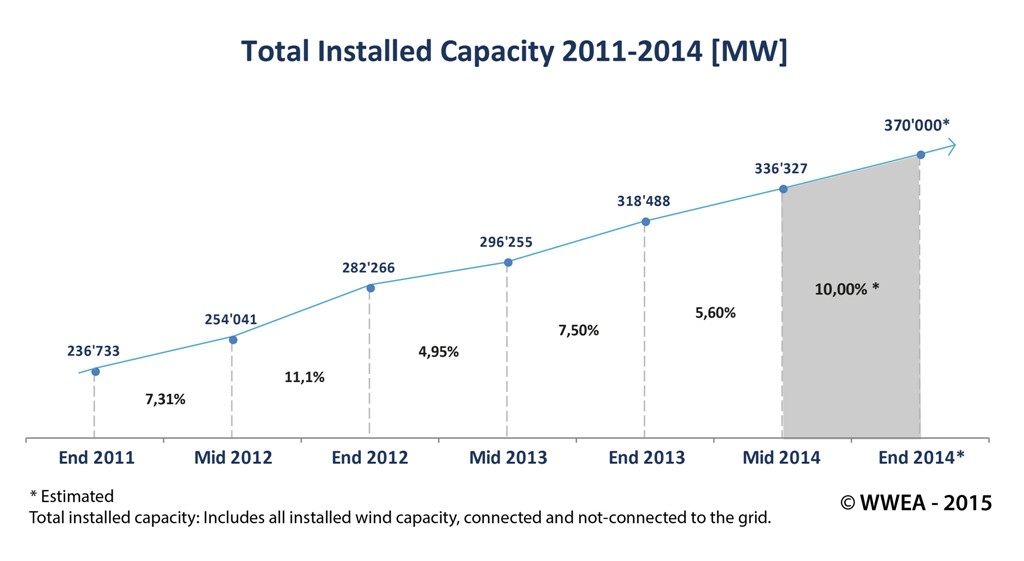 Wind power is now an undisputed pillar of the electricity supply in many parts of the world. 370 Gigawatt of wind power installed worldwide can now contribute close to 5 % of the global electricity demand. Several countries, including Denmark, Spain, Portugal, Ireland, the United Kingdom and Germany, have now reached 10% or more of their power coming from wind.

Stefan Gsänger, WWEA Secretary General: “The global figures for 2014 look very bright, we are very pleased to see that wind power investment is still speeding up at an enormous pace. Especially the new markets in Latin America as well as in Africa are reflecting the importance which wind power is now playing in the electricity supply, as a cheap and reliable power source. However, there are some clouds on the sky: Several of the leading wind markets especially in Europe have seen stagnation, and some of the booming markets have been caused by anticipated setbacks in policy frameworks. And when looking at the longer-term trends, the key factor for the future success of wind power will be the political and social support for wind power. In this sense, WWEA will intensify its work on advising policymakers about the benefits of wind power, and how to make these benefits accessible for communities all over the world.”

Gadi Hareli, WWEA Board Member and Executive Chair of the WWEC2015: “The WWEA has been a strong supporter not only of existing mature markets but also of new developing markets. Such is the case of Israel and the upcoming World Wind Energy Conference WWEC2015 (www.worldwindconf.net) which is expected to be the cornerstone for the 3 Gigawatt potential of the country, as well as many more in the region. WWEA sees the main challenges of further wind power deployment in boosting this towards 100% renewable energy, with wind being a dominant factor.”

The World Wind Energy Report 2014 including detailed statistics will be published in April 2015.