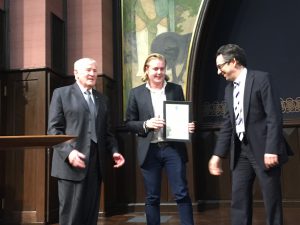 WWEA believes that the Paris Agreement has been the outstanding global achievement of the last twelve months: By agreeing on a greenhouse gas neutral energy supply in the year 2050, the 195 governments of the world and the European Union have in fact agreed on a 100% renewable energy future for our planet. Some may criticize that the agreement is not clear enough in how to reach this goal, however, it has brought a fundamental paradigm shift. Already today it can be observed that every investment decision which is not in renewable energy is now under pressure and requires justification. The most remarkable aspect is that ALL governments have agreed on such a paradigm shift. Hence the agreement constitutes a milestone in the history of the world which it may save.

During the WWEC2016 in Tokyo, WWEA President Peter Rae handed the Award to a young WWEC participant, Mr Sebastian Andrén from Sweden, who accepted it symbolically on behalf of the governments and for the future generations which will benefit from this landmark agreement. Sebastian will report about the progress made during the WWEC2016 to be held in Malmö/Sweden in June 2017. 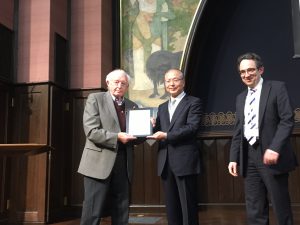 The World Wind Energy Honorary Award 2016 for extraordinary personal achievements was given to Professor Izumi Ushiyama as a leading wind energy expert who has promoted renewables for many decades not only in Japan but also all over the world.

Prof. Ushiyama has for decades been a leading wind power pioneer in Japan and very early he supported wind also at the international level. He has been engaged in extensive field of research, such as Savonius type wind turbines, hybrid system of wind, solar, hydro and biomass energy, low-wind speed targeted horizontal axis wind turbines and in setting up a test station for small wind turbines. Prof. Ushiyama has written important books about wind energy and renewables, altogether 26 publications.

Further to this scientific research, he accepted many foreign students from developing countries like Kenya, Ethiopia, Mongolia, and established tight relationships between Japan and those developing countries. In those activities, he also undertook a huge effort on human resource development in the renewable energy sector.

He is currently serving as the President of the Ashikaga Institute of Technology where he continues to develop wind power with many students from foreign countries educating a new generation of students needed for the transition to the Solar Age and enhancing international technology transfer.