Fukushima/Bonn, 9 November 2016 (WWEA) – On the occasion of the 1st World Community Power Conference in Fukushima, the Board of the World Wind Energy Association decided to give the World Wind Energy Honorary Award 2016 for extraordinary achievements for the dissemination of wind power and renewable energy, in particular in the field of community power, to Dr. Tetsunari Iida. 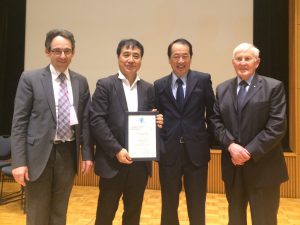 Dr. Tetsunari IIDA received the Award as a pioneer and visionary of renewable energy and as a community power proponent in Japan and worldwide

Being a nuclear engineer by education, Dr. Iida worked for the nuclear power industry for 10 years. In 1990s, due to increasing doubts in this technology, he quit the job and headed to Scandinavian countries to study the on-going policy and societal evolution on renewable energy. Upon his return to Japan in 1998, he played a key role in drafting the feed-in tariff law in Japan, and in forming a suprapartisan coalition. The law was approved by the Diet not in 2000 but only after the Fukushima Daiichi Nuclear Power Plant accident. However, without Dr. Iida’s effort starting in 2000, Japan would not have the FIT law today.

In 2000, Tetsu Iida founded the Institute for Sustainable Energy Policies ISEP. Unlike today, ISEP was back then almost a sole entity to deal with renewable energy and he became an icon and forerunner of the renewable energy movement in Japan. After Fukushima and the adoption of the FIT, Japan enjoyed substantial growth in renewable energy. Here again, Tetsu and ISEP concentrated on promoting community-based, distributed energy model, which resulted in the formation of the Japan Community Power Association JCPA in 2012. JCPA now has 40 member organizations and companies throughout Japan.

Dr. Iida’s contribution to the renewable energy transition is both broad and significant in terms of policy making, business model development, financial engineering and community involvement. Among them, the development of “Green Power Scheme” and “Community Financing Scheme” enabled the general public to support and participate in renewable energy projects.

In addition, he has also contributed to the capacity building of young researchers and practitioners. ISEP has welcomed more than 140 students for internship regardless of their nationality, and currently most of them have become drivers of renewable energy transition in both the public and the private sector. Through his international activities, Dr. Iida has also become an important international actor for the global shift towards 100% renewable energy.