Offshore wind could grow more than 650% by 2030,  becoming a key power generation technology

Tokyo, Japan, 31 October 2016 – Offshore wind power has the potential to grow from just 13 gigawatts (GW) in 2015, to 100 GW in 2030, according to new analysis from the International Renewable Energy Agency (IRENA). Innovation Outlook: Offshore Wind, launched today at the World Wind Energy Conference in Tokyo, provides an overview of the future developments that will drive the offshore wind power boom, including technology advancements and further cost declines.

Technology innovation will be a key driver of the offshore wind boom. The report highlights upcoming innovations that will enable sector development, including next generation wind turbines with larger blades, and floating turbines, which will open up new markets in deeper waters. These advancements, combined with other sector developments, will reduce average costs for electricity generated by offshore wind farms by 57 per cent over time – from USD 170 per megawatt hour (MWh) in 2015 to USD 74 per MWh in 2045.

“The potential for offshore wind is enormous, but to realise it, governments must support technology innovation, and implement mechanisms to reduce technical risk and finance costs,” said Stefan Gsaenger, Secretary-General of the World Wind Energy Association. “This report from IRENA helps lay the foundation for this needed action.”

Innovation Outlook: Offshore Wind provides a set of recommendations for the effective implementation of policy mechanisms and incentive programmes that would allow offshore wind technology to realise its potential to decarbonise the energy market. Recommendations include provisioning targeted research and development funding and supporting information sharing and skills development, amongst other measures.

The report is part of the Innovation Outlook series, which highlights innovations and future outlooks for various renewable energy technologies. Innovation Outlooks are also available for mini grids and advanced liquid biofuels. 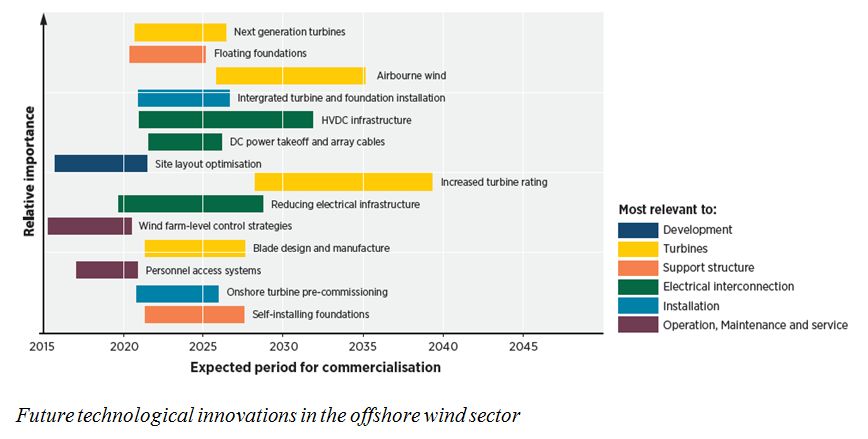 IRENA is mandated to be the global hub for renewable energy cooperation and information exchange by 149 Members (148 States and the European Union). Roughly 27 additional countries are in the accession process and actively engaged. IRENA promotes the widespread adoption and sustainable use of all forms of renewable energy, in the pursuit of sustainable development, energy access, energy security and low-carbon economic growth and prosperity. www.irena.org