“Perspectives of the Wind Energy Market in Russia” launched 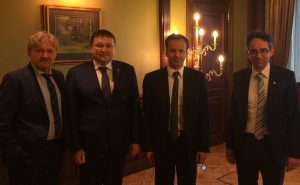 You can download the report in English here and in Russian here.

Moscow, 21 June 2017 (WWEA) – WWEA and FES Russian Federation, in collaboration with Peter the Great St. Petersburg Polytechnical University and the Russian Association for the Wind Industry RAWI, have conducted a study on the status of the wind energy market in Russia. The study “Perspectives of the Wind Energy Market in Russia” has been presented today during a launch event in Moscow. Recently, Russia has started to re-vive its wind power sector and the first projects of 700 MW have been announced to be constructed over the next three years.

The study concludes with recommendations on how the identified barriers can be addressed. The main task will be to create an attractive environment for investors by introducing a remuneration system allowing to invest and by defining a market size volume similar to other leading wind markets – China, Germany, India or the USA each have recently seen annual installations in the range between 2’000 and 30’000 MW. Creating a sizable market also includes the task of improving the existing standards, introducing a state territory planning program for wind energy projects and starting state participation in pilot projects in remote and isolated regions on a massive scale. To create more transparency for potential market participants would also be an important and general task.

It is proposed that the Government of Russia, in consultation with the main stakeholders, develops a “Wind Roadmap for Russia” which may include a strategy for grid connected wind farms as well as the off-grid sector.

Stefan Gsänger, WWEA Secretary General: “Considering its huge wind resources, its industrial capabilities and its long history in wind power, Russia should be a natural leader in wind power. With our study, we have been able to identify some of the key areas in which the Russian government needs to act in order to assume such a leading role. Wind power, together with the huge bioenergy, hydropower and solar resources, can help securing Russia’s role as an energy supply nation also in a 100% renewable energy world. We are especially delighted that Deputy Prime Minister Arkadi Dvorkovich expressed his appreciation of WWEA’s work during our meeting yesterday. He assured us the Russian government’s strong commitment to accelerate wind power deployment in the country and to create the necessary technological and industrial capacities, also based on international cooperation.”

Eugeni Nikolaev, CEO of Russianwind: “The report on the Russian wind market by WWEA, such respected and independent organization that has already supported other emerging wind energy markets, is of immense value and is another important step for the breakthrough of our market. We are honored that we have contributed to it.”