Lima/Stockholm/Bonn, 4 December 2014. The COP20 Presidency has branded the related WBA/WWEA Side Event of 5 December as “Lima Climate Action Highlight” and will showcase a summary during the COP20 High-level Session on 11 December.

Regions, cities and communities leading the transformation towards 100 % renewables

Regions, cities and communities demonstrate that the transformation to a 100% renewable fuelled society is possible. The WBA and WWEA report here in Lima about examples already realized

– One example is a city with 170 000 inhabitants in central Europe (Pécs, Hungary)

In Pécs, the coal and gas fired boilers for district heat were completely replaced by two biomass boilers with a total capacity of 300MW based on wood and straw generating now all the electricity and Heat needed in the city.

– The other example a rural region with 30 000 inhabitants (district Murau, Austria).
The district of Murau is implementing a renewable energy and climate model, coordinated by a climate manager aiming to promote electricity from hydropower, photovoltaics, wind, biomass as well as heat from biomass and solar thermal and mobility based on electricity. In 2013 the region produced 200% of the electricity needed with renewables, 70% of the heat needed and just started different projects of e-mobility. By 2020 also heat will be 100% renewable and transport will follow later.

The Global100%Renewables campaign www.go100re.net has collected more examples of communities, cities and regions which have achieved 100 % renewable energy. Many other communities, many cities countries could follow these examples based on the gained experiences.

Finance as a key: Green Climate Fund to provide guarantees and grants 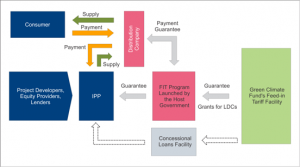 As reported by the WWEA, one major barrier for a fast switch towards renewable energy lies in mobilising the necessary financial resources. Renewables, although being cost-competitive, require a high share of initial investment. Hence capital access and capital cost are often decisive, in particular in the developing world.

The Green Climate Fund should hence provide guarantees for investors, in particular via national governments, e.g. by backing feed-in tariffs or microcredit schemes with public guarantees. The need for such guarantees is strongly supported by renewable energy investors in the developing world.

Based on such new mechanisms, the Green Climate Fund could leverage out of every dollar invested an investment of 20-50 dollar – so that the currently available 5 billion USD for mitigation could result in renewable energy investment of more than 200 billion USD.

Seen from a global climate perspective the world is moving into the wrong direction. From 2010 to 2012 the demand for fossil fuels increased by 5%, the GHG emissions by 4.7%. By 2012, the world consumed 590 Mtoe more fossil fuels than 2010 and 118 Mtoe more renewables, 67 Mtoe of which was biomass. The growth rate of fossil fuels was 5 time bigger than that of RES.

These figures are in plain contradiction to the dramatic reports on the status of the world’s climate published recently by the IPCC. Following the climate mitigation scenario of the IPCC the CO2 emissions should be only a third of the world’s actual emissions in 2012.

In addition,
– In the year 2013, the governments of the powerful G20 countries spent US$78 billion to support the exploration of new oil and gas fields.
– Over the last months the oil price declined by 40%, a price decline that may trigger an additional increase in the use of fossil fuels and GHG emissions – unless proper government policies are implemented.

These are alarming facts. Unless the governments of the countries, represented here in Lima, start stronger efforts in the fight against climate change and in favour of the transition to renewable energies, the global efforts to comply with the 2°C target will fail.

According to an analysis of the IPCC reports, made by WBA, the world should increase the share of renewables in the global supply to more than 50% by 2035 and simultaneously reduce the combustion of fossil fuels by half, in order to comply with 2°C target. The Global100%Renewables campaign, co-founded by WWEA and WBA, suggests accordingly that new energy related investment should only be done in renewable energy from now on.

About the World Bioenergy Association

The World Bioenergy Association (WBA) is the global organization dedicated to supporting and representing the wide range of actors in the bioenergy sector. Its members include national and regional bioenergy organizations, institutions, companies and individuals.

The purpose of WBA is to promote the increasing utilization of bioenergy globally in an efficient, sustainable, economic and environmentally friendly way.

Since its foundation in May 2008, WBA has been working to address a number of promising issues including certification, sustainability, standardization, bioenergy promotion and debates about bioenergy’s impact on food, land use and water supply.

About the World Wind Energy Association:

WWEA was founded in 2001 and works for a transformation of the world energy system towards 100 % renewable energy, with wind energy as one cornerstone.

WWEA advises national governments and international organisations, WWEA is a communication platform for its members and

Currently WWEA has more than 600 direct members and represents the wind sector from 104 countries on all continents. The WWEA members include national wind energy associations as well as companies, scientific institutions and public bodies. WWEA’s member association have more than 50’000 members.